What is buckwheat milk and how is it made?

The starting material of buckwheat milk is the pseudo-wheat buckwheat. The triangular grains of the buckwheat plant belong botanically considered to the family of the Knöterichgewächse and count thereby not to the genuine cereal types.
Exactly at this point there is a decisive advantage of the milk alternative compared to other varieties: buckwheat does not contain gluten and can therefore be eaten by people with an intolerance without problems or drunk in the form of milk.
For the production of buckwheat milk, buckwheat grains grown mainly in Russia but also in Germany are soaked in water for several hours. Then mix the grains with water and crush them. To make the ready-to-drink milk, the solid remnants of the buckwheat grains are finally filtered out of the mixture. What remains is the buckwheat milk, as it is commercially available.

What are the healthy ingredients in buckwheat milk?

The richness of nutrients, vitamins and minerals is a strong argument for the milk enjoyment from buckwheat. With a protein content of 9.8 mg per 100, a glass of buckwheat milk initially provides plenty of energy for building muscle and maintaining a healthy metabolism.
There are 8 valuable amino acids in the milk that your body can not produce by itself. The proteins are also considered to be particularly easy to digest. The fat content of the milk is also positive: at just 1.8 g per 100 g, buckwheat milk contains significantly less fat than classic cow's milk.

When it comes to vitamins and minerals, buckwheat milk performs well, especially with vitamins A, B and E as well as the minerals folic acid and manganese.
In addition, buckwheat products such as milk are attributed, among other things, to reducing the bludder-lowering effect on account of the ingredients contained therein.

Responsible for this is the naturally contained active ingredient rutin, which protects against vascular damage. Not to be neglected is also the contained letzithin, which can lower the cholesterol level and promotes the functioning of the liver.

What contribution does buckwheat milk make to a healthy diet?

Do you drink buckwheat milk regularly, resulting from the ingredients contained several positive effects. On the one hand, you can safely enjoy the milk with a nut allergy, a celiac disease, a lactose intolerance or if you eat vegan, without hesitation.
On the other hand, your body benefits from the valuable supply of vital and healthy nutrients and vital substances. With a glass of basic buckwheat milk, you can replenish your body's protein reserves, eat various vitamins and minerals, and protect your body from acidosis.

Where can I get buckwheat milk?

Buckwheat milk is rarely available in Germany. However, you can find something in an increasing number of organic supermarkets that have added the milk to their range. Also in the net there are more and more manufacturers, which market their buckwheat milk directly. Last but not least, buckwheat milk made from buckwheat grains and water can also be made by hand.

Which buckwheat milk products are available and how can I use them?

If you look around for buckwheat milk in the supermarket, you will usually discover only the pure milk. From the milk, however, can be conjured up a variety of dishes. Depending on your preference, you can enjoy buckwheat milk sweet or savory, cold or warm and at any time of the day.
Buckwheat milk tastes, for example, in muesli, in protein drinks or as a main ingredient of sweet milk mix drinks. On the other hand, the milk alternative is not suitable as a baking or cooking ingredient, since the glue-white gluten that connects the ingredients is missing.
Featured

Flaxseed Milk - All about the vegan milk substitute made from flaxseed

Spelt milk - all about the vegan milk alternative from spelt

Oat Milk / Oat Drink - What can the vegan milk substitute do? 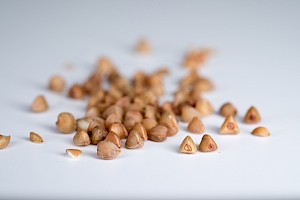 Buckwheat milk is quite new on the market, but will soon be found more frequently on supermarket shelves.
Rating: 5 of 5 stars
all-about-milk.com