Millet milk is used in various fields. In culinary terms, milk from millet is a healthy alternative to cow's milk. Consumers value sustainable production and environmental and animal welfare and choose a product that has been produced without animal products.
Millet milk is used in a similar way to milk and serves very different purposes in the kitchen. It can be drunk neat or used in recipes as a milk substitute. The differences are marginal, which is why millet drink is becoming increasingly popular.

Hirsemilch is also used in cosmetics. The healthy milk alternative can be used as a face mask, exfoliant or even as a healthy oil for the skin. More and more manufacturers are offering care products containing millet milk. Because the milk is not harmful to the skin, it is also suitable for regular use.

Search for Millet products on Amazon.co.uk

Where can I get millet milk?

Millet milk is now offered by many manufacturers. It is available in all major supermarkets and discounters. There it is usually offered under terms like millet drink. Millet milk is also available on the internet. The selection of different drinks is larger in online shops, but the quality varies similarly.
For example, drinks with cocoa or strawberry flavor are offered. The classic millet milk consists mainly of millet and water. This makes them a healthy alternative to many other dairy products on the market, which usually contain larger amounts of fat or sugar.

The price of millet milk, however, can not compete with the classic cow milk. Nevertheless, it is a cheap alternative to other products such as rice drinks, which can also be found in most stores. In the health food store or on the weekly market there is now millet milk.

Unlike rice drink, which is not optimally tolerated by many people due to the rice, millet milk is usually well tolerated. The grain also has a satiating effect, making it suitable for breakfast, lunch and dinner alike.

Which ingredients are in millet drinks?

Typical nutrients are:
100 milliliters millet milk contains ten grams of carbohydrates and between five and six grams of sugar. The salt content is usually less than one gram. Also protein and fiber are present in small quantities.

What are the differences to cow's milk and other milk alternatives?

Millet milk is made from natural raw materials. The classic millet drinks contain millet, water and few other additives. Flavor enhancers are usually just as little included as dyes or other artificial additives. Unlike cow's milk, millet milk is also less fatty. This makes them a good choice for a diet or people with intolerance.
Unlike, for example, the rice drink, millet milk is cheap to produce. The grain is grown in Germany and processed by various manufacturers such as Natumi to millet drinks and other millet milk products.

Finally, Hirsemilch also differs in the production of cow's milk, soy or rice drinks. The millet must first be processed before it can form millet milk. Once done, the millet milk has some important health benefits.

What are the most important properties of millet milk?

Millet milk is offered under names like "millet drink" from various manufacturers. The products are usually made without added sugar and one hundred percent vegetable. In addition, they are lactose-free and contain no milk protein. That is why millet milk is generally suitable for allergy sufferers. Millet milk is also vegan and produced without genetic engineering.
Consumers can orient themselves at different seals. For example, the Bio-Siegel or the EU-Bio-Logo speak for the usual quality. In addition, the products contain references to the fulfilled standards and norms. People who consciously feed themselves receive all the information they need from the various manufacturers in order to verify the quality of the fresh millet milk themselves.

Pea milk - worth knowing about the vegan milk alternative

Lupine milk - worth knowing about the vegan drink from lupine seeds

Another vegan alternative to cow's milk 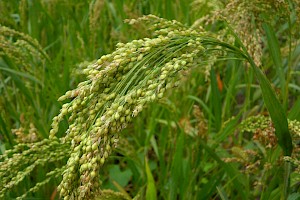 Millet milk can be used in a variety of areas and is a popular alternative for vegans.
Rating: 5 of 5 stars
all-about-milk.com