Notice: Trying to access array offset on value of type null in /home/wanttoha/public_html/site/assets/cache/FileCompiler/site/templates/advanced_site.php on line 210
 ▷ Buffalo Milk - All about the water from the water buffalo ◁

The milk of the water buffalo has been drunk for about 4000 years.

Originally, the water buffalo originated from Asia, where the many benefits of buffalo milk were first enjoyed almost 4,000 years ago. Another world-famous area where buffalo milk products are cultivated is Campania in the south of Italy. Most of them will be familiar with the famous buffalo mozzarella, which, with its characteristic taste, ennobles Italian national dishes such as pizza or caprese. Anyone who tries to imitate them with cow's milk products will probably only experience a fraction of the taste fascination.

Before we come to the sensory differences, let's take a quick look at the composition of buffalo milk. With just under 8 grams of fat per liter, buffalo's milk is more than twice as rich as cow's milk. Also, the calorie count of 108 per liter is higher than the caloric value of cow's milk. Those who do not necessarily have to pay attention to the slim line, for the higher fat content could still include an important health aspect:
More fat in this case also means more healthy essential fatty acids and significantly more calcium, biotin and vitamin C than cow's milk.
Another benefit that should be of interest to more and more people with cow milk allergies and lactose intolerance: Although buffalo milk is very similar in structure to cow milk and also contains lactose, it is much better tolerated. In many cases, no or hardly allergic reactions occur during and after the consumption of buffalo milk products.
The cholesterol content is also positive. Although the cholesterol is medically and in terms of its effect on human health is not undoubtedly investigated, but applies to the cholesterol content of buffalo milk that this is significantly lower than that of cow's milk.

The milk of the water buffalo tastes more intense and has a slightly nutty taste.

Using the example of the buffalo mozzarella, the difference between the milk of a buffalo and that of a dairy cow can be easily understood. Applies to the mozzarella, which we find in our supermarkets mainly rather than tasteless and in consistency rather rubbery, so many lovers of mozzarella from buffalo milk appears as a revelation.
It is more intense in flavor, slightly nutty, quite reminiscent of lavender and wonderfully creamy. Anyone who has ever enjoyed a buffalo mozzarella will probably only resort to the cow's milk product in exceptional cases.
In addition to the well-known mozzarella di bufala from Campania, which is now also produced in Germany in approximately the same quality, there are quark and yoghurt products in German supermarkets. One should already like the intense taste of these products. For desserts, for which the corresponding cow's milk products are popular in this country, the buffalo milk range is rarely suitable. Their strengths are more culinary if they are used heartily with vegetables or as a dip to meat or Mediterranean fries.

The buffalo's milk is more expensive than cow's milk

However, what can spoil the fun a little, is the difference in price between the two varieties, which likes more than 100 percent. This immense price difference is justified by the limited amount of buffalo milk. While a dairy cow averages up to 50 liters a day, the water buffalo only needs eight to ten liters a day. This number alone is likely to explain the price difference. But since buffalo milk products are more intense not only in terms of their nutritional value but also in terms of their concentrated variety of flavors, only a fraction of the amount is needed. In the full taste you still get - and it also takes in enough nutrients and vitamins.

Of course, quite similar to cow, goat or sheep's milk also from buffalo milk, many wellness products are produced. Buffalo milk is so part of numerous masks, bath packs or creams. Especially for the control of wrinkles, buffalo milk is preferably used because of its natural consistency and high fat content. But again, because of their limitations, products with a high buffalo milk percentage are much more expensive than those without.

The pros and cons

Higher mineral and vitamin content in the buffalo's milk.

Objectively, the biggest advantage of buffalo's milk in its health aspects: A significantly higher mineral and vitamin content at
At the same time low cholesterol value speaks for the consumption of buffalo milk products. Anyone who appreciates the sensory properties and the stronger taste of the buffalo milk products, especially for the mozzarella products made from buffalo milk, which are almost indispensable.
In any case, the price, which is immense in comparison to conventional cow's milk, is a disadvantage. Also health wise, caution is necessary if a dietary diet is medically prescribed or you want to pay attention to a particularly slim line, because the fat content is more than twice as high as with cow's milk.

Products made of buffalo milk

Symbolbild
Buffalo Parmesan
From the milk of the buffalo, among other things, a variety of cheeses and cheeses are produced. A very popular hard cheese, the Parmesan, is also among them. The Buffalo Parmesan or Sovrano di Bufala can even be ordered at some online mail-order shops. For example, at gourmondo.de with 40% buffalo milk content or here at feiner-kaese.de with 20%. The price is just under 10 € per 250g.

buffalo mozzarella
originally: Pasta Filata cheese from Italy
The genuine buffalo mozzarella has been given the title "protected designation of origin" in the EU and may therefore only come from a well-described area. The origin of the Mozzarella di Bufala Campana, whose production is likely to take place since the 15th century, has therefore been regulated since the 1990s.
The buffalo mozzarella had made it more often in recent years in the headlines. In 2007, thousands of buffaloes with brucellosis bacterial infections were detected during inspections on farms. The high prevalence of infections was attributed to the mafia or camorra, which had many farms under control. In 2008, there was renewed excitement as controls in some dairies found increased dioxin levels in buffalo mozzarella. These values were charged to the Camorra. Pasture lands bordering illegal landfills have allegedly caused these higher values. 2014 then the next mozzarella scandal: Four paws reported scandalous states in the buffalo farming on numerous buffalo farms in Italy. A report of the Süddeutsche Zeitung can be found here: "The dark secret of Mozzarella" on sueddeutsche.de.

Here you can find out if and how much lactose is contained in the water of the water buffalo.

Videos on the topic 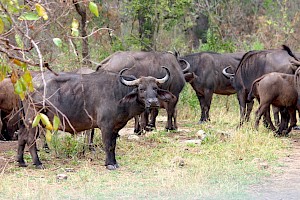 Buffalo milk is a tasty but expensive alternative to traditional cow's milk.
Rating: 4 of 5 stars
all-about-milk.com