The llama was originally developed from the guanaco. All species of the New World camelids mate with each other, the individual species are difficult to distinguish from each other. As Neuweltkamelide Lamas are rather small animals with a body length (head-hull) of 1.8 meters and a weight of up to 200 kilograms. After a gestation period of 12 months, the mother gives birth to a young, twin births are very rare. The young are nursed for 12 months. In recent months, only more social drinking, the easier the young Lama integration into the ranking of the herd.
If the kittens are removed from their mothers for a few days, they no longer allow the sucking process. Llamas live below the snow line, but above the tree line. They feed mainly on hard grass and leaves. In the areas sufficiently clean water points must be present, since llamas are dependent on the daily water intake due to the missing hump.
As a wool supplier and therapy animal (Lamayoga, migrations), llamas are also kept in small herds in Europe. As the wolf population increases, llamas are also used to protect herds of sheep.

All about llama milk

About 2 liters per day are given.

Strong fluctuations in the composition.

The milk of the llama contains an average of 86% water, 4.23% protein, 3.15% fat and 5.93% lactose. The milk of the llama contains more protein and lactose than cow's milk. It is not suitable for people with lactose intolerance. The milk of the llama also contains more calcium (1701 ppm), phosphorus and potassium than cow's milk. The fat content corresponds to the fat content of cow's milk. Although lamilcha is healthy due to its high mineral content, the llama is not used to produce larger quantities of milk due to the small size of the population and the special nature of milk production.
During lactation, the composition of the llama milk is subject to strong fluctuations. The amount dispensed changes by up to 1 liter per day. An increase in the amount of milk is not possible due to the poorer nutrient supply of the dams in natural grazing in the Andes. The peak of lactation is about three weeks after birth.

Taste and use of milk of the llama

From lama cheese to homeopathy.

How does the milk of the llama tastes?

The milk of the llama contains a lot of lactose and tastes sweet.

is there cheese made of llama milk?

Llama milk can make both sweet and sour cheese. Because of the small amounts of milk available, this form of dairy farming is not practiced.

Llama milk contains a high amount of minerals and trace elements needed to build healthy bones. For people with lactose intolerance llama milk is not suitable because of the high proportion of lactose.

Lac jama is used in potencies C30 and C200. Like all milk products, high potencies of Lac jama have a psychic effect. The self-confidence is strengthened, facilitates the demarcation to caregivers. Dismay fears are mitigated. In lower potencies, Lac jama has a strengthening effect on the entire skeletal system, joints and ligaments and supports the function of the muscles.

Lilac milk in the cosmetics

Llama milk is not used in cosmetic treatments. In the production of natural soaps fibres of llamas are used, which give the soaps their typical color.

Because of its low availability, unlike buffalo's milk or donkey milk, llama milk  is not used in spa treatments.

Questions about the llama milk

Where can I buy llama milk?
Llama milkis available only in small quantities and can hardly be purchased. Lac jama Globuli is produced in special pharmacies. 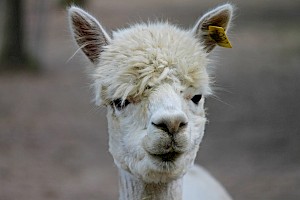