Notice: Trying to access array offset on value of type null in /home/wanttoha/public_html/site/assets/cache/FileCompiler/site/templates/advanced_site.php on line 210
 ▷ Yakmilch - All about the milk from the Yak

Knowledge about the yak and the milk of the yak

The yak, an important farm animal for nomads

In addition to milk, wool, meat and manure are processed.

In addition to milk, yak meat is an important source of food for the nomads, who also use the animals as workhorses and horseback riding and who process their leather, wool and dried manure (as fuel). According to estimates, there are approximately 15 million yaks worldwide. The majority lives in China. But they are also widespread in regions of Mongolia, Nepal, India, Kyrgyzstan or Bhutan and form the livelihood of many people. Due to their resilience and frugality, yaks are also occasionally kept by breeders in German-speaking countries, for example in regions that are difficult to reach for dairy cows.

Yakmilch contains more fat and protein than cow's milk. But it also has more unsaturated fatty acids than cow's milk, which are said to protect the heart. Yakmilch also has conjugated linoleic acids, which can delay diabetes, arteriosclerosis and cancer, according to a study published in the Journal of Agricultural and Food Chemistry. Also various vitamins could be detected in Yakmilch. Yakmilch should also have a high content of calcium and phosphorus.

The main traditional product of yakmilk are yak butter and yak cheese. Yak butter has a high fat content of 90 percent and is well preserved. The yak butter is drunk in the butter tea by the monks in the Tibetan monasteries. Yoghurt is also made from Yakmilch in Central Asia. A traditional sweet made from yakmilk is Kurauni - it is made by slow cooking and is enjoyed for celebrations. Also known is Öröm, a thick cream, which is a typical product from Mongolia. Choormog, a lightly alcoholic milk drink, is made from a yoghurt-like product by adding yeast.
Cosmetic products are also made from Yakmilch. Russian consumers appreciate natural products from Siberia very much - including those with yak milk. Some are also available on the European market. Some of the yak milk products sound quite exotic. From the greasy milk of yaks, which contains unsaturated fatty acids, for example, soap is created for supple hands, which is suitable for dry, mature and normal skin. Aftershave gels are also made on the basis of Yakmilch. It could have a cooling and nourishing effect on irritated skin.

More interesting articles for her

Pea milk - worth knowing about the vegan milk alternative

The cow's milk, popular and yet often demonized.

Mare's milk - The milk of the horse mares 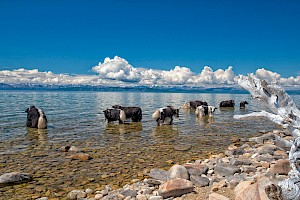 Yakmilch is rare here, but has many positive effects.
Rating: 5 of 5 stars
all-about-milk.com